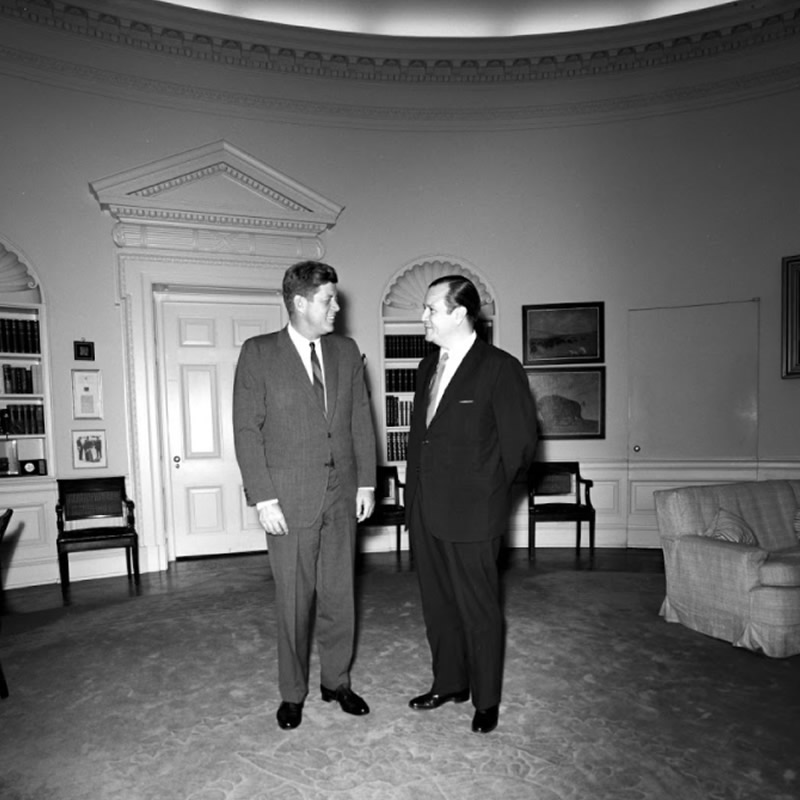 From this close, the Project Mercury space suits hanging
in the center of their glass musuem apartment
look like unworn children’s party costumes.
The prototype assembly drawings lack some gravitas as well.
They could be early sketches for jet packs, or the colored pencil
architectural blueprints you did when you were nine,
for the castle you were going to build overlooking the cliff
of your bunk bed. The space helmets could be advanced
papier mache, the playful taxidermied heads of astronauts.

But at this point in the presidential library,
at least six swelling JFK speeches in,
I am prepared to believe just about anything.
His voice has a quality I am unprepared for in longer stretches.
When he talks about the American character,
about our fixed regard for principle,
I can smell my first brand new social studies text book.
I can remember this old feeling, a surge of effortless pride
at my young, sunburned, wide-eyed Americanness.

When he says we should choose to do things
because they are hard, I practically raise my own taxes.
Just think – there was a time when we believed we could
conquer poverty and racism, crush the black heart of Communism
and travel to the moon if we were just organized enough,
if we just marshalled our resources in the directions of our better dreams.
All of this makes the coming exhibits especially hard to take.
Walter Kronkite is choking up on twelve monitors,

the quickening pulse of the newsroom and the tight held breath
of an entire nation straining the scene. The confusion and chaos
of what’s next swirls and eddies, and does not settle.
I want to go back to the Moon Shot room. I want to go back
and stare at the artifacts, at those treasure maps to pipe dreams.
But it wouldn’t be the same.

There’s this chunk of the moon on display there,
suspended in a clear thermoplastic pyramid.
The plaque says it is more than three-billion years old.
Three-billion: it sounds like a made-up number. But I know it’s not.
I know that long, exponential springs of time are behind all the quickest leaps.
That what I can see in the sky at night, might already be gone,
even though the shouting of the stars is so clear, so bright.

(Published in Rise of the Trust Fall, Write Bloody Press).